In truth, I did not expect to sell my hand-painted book, Moon Atlas, in the Zeitgeist show; but it sold and because there were certain things I very much wanted to retain for myself, I created some paintings as an extension of the book.

Jack Fischer has put together a show of collage, including two of mine, Doorway and Rothko, from the series I'm currently showing at Ivan Karp's O K Harris Gallery in New York.  There are twenty-two artists in Jack's exhibition, among them, Dennis Parlante, Val Britton, Deborah Barrett, Alejandro Chavetta, John Hundt, David King, Catie O'Leary and Matt Gonzalez. 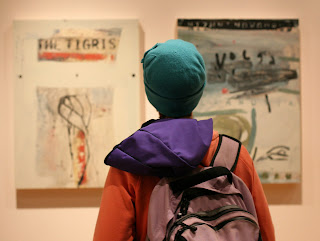 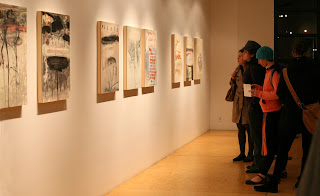 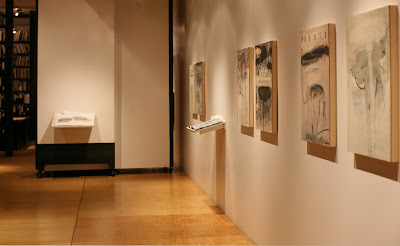 Posted by Ward Schumaker at 10:27 AM No comments:

Despite a snow storm (with lightning and thunder, no less) we had a terrific turnout for the opening at O K Harris, and we thank all who made it through the slush and cold to attend.

This is a review of my current show, lifted from Art Now Nashville:

Ward Schumaker has been interpreting text into visual narrative for most of his working life. Though he started out in fine art over 40 years ago, he evolved into an internationally recognized illustrator for most of his career and is still heavily involved in the business. His illustrational style uses text as an integral part of the drawing to identify his clients and their products.  Eleven years ago, he journeyed back into his mind to create for himself. 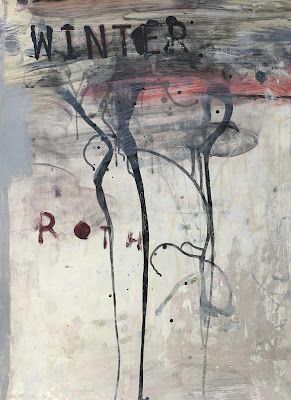 Geography Lessons, his second exhibit at Zeitgeist Gallery, is imagery contained within, or detached from, the construct of the codex. Three artist books join nine isolated framed pages in a richly tactile and absorbing show. Schumaker’s process begins with morning meditation. The random words and streams of consciousness that evolve during these sessions – and also from his dreams – form the narratives of his various series. He seeks to be a kind of visual medium, searching to process ideas that are larger than he is. The results are confined to, but seem to expand from, the pages of his hand-bound books.

Ironically, his choice of media is mainly book paste. Wielding it like paint, and indeed often mixing it with acrylic, it is brushed and scraped on in layers that cover his surfaces like the detritus of time. The text, both stenciled and cut, joins random clippings often sourced from vintage French magazines and newspapers. French companies still make up the majority of Schumaker’s commercial clientele, and he has no shortage of media brought back from his regular trips to the country.
(note: French clients made up the majority of my illustration work in 2011, not in general.) 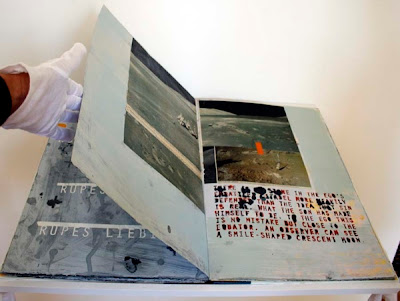 In Moon Atlas, a 56-page book, Schumaker’s poetic and minimalist rendering of the awareness of planetary movement translate the concept into a mysterious science that might be confused with mythology. He has utilized magazine clippings of France’s original coverage of the American moon landing, which lends an additional disorientation to the discourse. Pages of monochromatic moon-mapping images are jarred by the intrusion of intense color, as when day follows night. 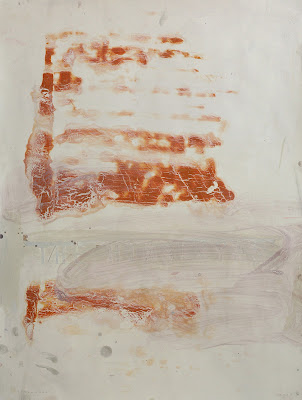 The nine framed pages reference geographic regions that are united in a general sense of remoteness. They are heavily atmospheric, and contain visual abstractions that along with the text seem to describe mood, or fleetingly remembered details of place. In The Himalayas, burnt orange smears of what could be blood or dirt are overlaid with the white of cracked, dirty ice. The Carpathians is darker, and dramatic. The faded text of its name is ominously surrounded by dark cloud forms and slashing vertical lines of pigment. 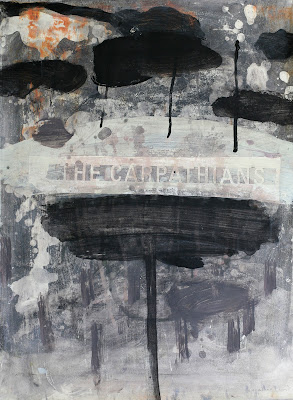 In Zaragoza, the text “Puente” (bridge) is stenciled along the top and underlined with a broad stroke of black, bringing to mind Zaragoza Puente which spans the Rio Grande and connects El Paso, Texas to Juarez, Mexico. Though it might be a bit of a literal translation on my part, the colors underlying Schumaker’s pale gray smears of pure book paste reflect the earth tones of the semi-arid geographic area. The tone of the unpigmented paste is the constant throughout Geography Lessons. It grounds the work in a solid organic base that connects to much of the source material that we are familiar with, in our pursuit of how we document geography: from old maps, plaster reliefs, low contrast interstellar satellite photographs, to the negative space of the book page. 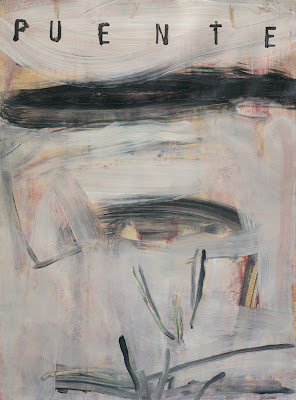 Denise Stewart-Sanabria is an artist and a frequent contributor to Art Papers and Number.
Posted by Ward Schumaker at 9:00 AM No comments: