A book I created in 2010 for the San Francsico Center for the Book's Small Plates fundraiser will be included in a show, Look! Book Arts, at the Healdsburg Center for the Arts. This show was curated by C.K.Itamura. The opening reception is Saturday, 16 April, 2016, from 5 to 7pm. For more information: http://www.healdsburgcenterforthearts.com/exhibits/look-book-arts 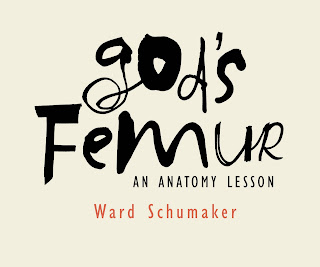 It's 1965, I'm twenty-two years old, and six men in suits are hustling me through the basement of the shopping center that is host to the Nebraska Governor's Annual Art Competition.  They lead me to a stairway that descends deeper yet, into some sort of sub-basement--and a small windowless office, lit by a single 100-watt bulb and furnished with a desk, two chairs and a walk-in safe.  It's in this safe they have sequestered the painting I've entered into their show--but I don't know that yet. 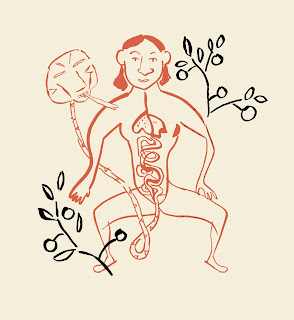 A short bald man sits at the desk, studying a piece of paper.  I'm directed to sit in front and the six men-in-suits form a semi-circle behind him.  He must be the big honcho, I figure, and suddenly I realize: of course! he's the guy who's gonna tell me I've won first place and give me the $400 prize!--which I desperately need in order to pay the tuition for my last semester at college.
In school I'm known for painting derivatives of Marc Rothko, but I couldn't see that kind of thing winning.  So, taking a cue from my anatomy class, I've created something figurative, Biblical even, in hopes of winning first prize.  And because Pop Art is de rigeur, I've included a comic book touch: a word balloon springing from the mouth of the figure. 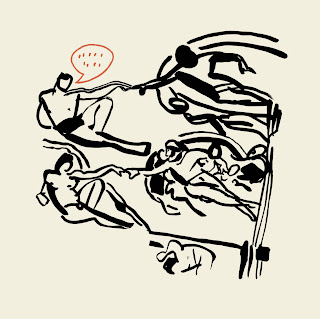 But instead of congratulating me, the short bald man at the desk looks up, stares directly into my forehead and says: "I am certain you know that it is illegal to sell pornography in the state of Nebraska." 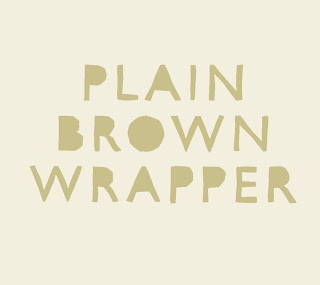 "What's that?"
He repeats himself. "It is illegal to sell pornography in the state of Nebraska, and these men," (he motions behind him) "our lawyers, inform me that by entering the the competition and signing the form which stipulates the first-prize winner will be paid for his work, you have, in essence, placed your painting up for sale.
"And as you well know, the painting you have entered is obscene.
"But," he says.  "But.  We would not like to see you go to jail.  We would prefer that you sign this form."  And he hands me the piece of paper, an agreement to remove my work from the show, no matter that judges have apparently awarded it first place. 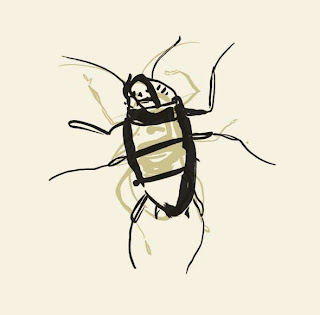 Now, I'm a college kid so I've read my Kafka, but I don't yet use drugs so I think this kind of thing can't happen here.  But it can and it is and I don't know what to do.  I try arguing that my painting isn't dirty, that it's based on Michaelangelo's Creation of Adam (which is in the Vatican for God's sake) and that it's sort of an x-ray anatomical lesson in that you can see into it, the bones inside the figure--but the man on the other side of the desk interrupts me.  "Mr. Schumaker," he says, "you know we cannot hang a painting like this in our shopping center.  Children and nuns will be viewing this show."

I do not understand, it's all so unexpected, but as in Kafka, I am assumed guilty, I do not escape, and I do not awaken from a dream.  Half-an-hour later, I emerge from this sub-basement inferno, having signed their piece of paper and sold my painting for $425.  Which is, they point out, twenty-five dollars more than the first-place prize!  And, as a concession to me, they have agreed not to destroy my painting, but to offer it instead to the local museum. 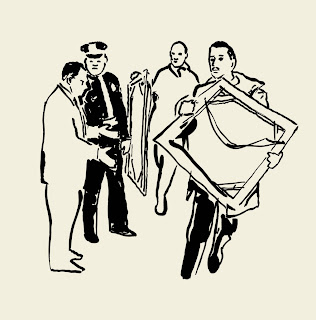 In the next few days, the incident grows.  Scores of artists remove their work in protest; the governor's wife calls my work "immoral and obscene" (later we hear she never actually saw it); and I am offered my first one-man show--which, unfortunately, I have to turn down because all of my other 'good' paintings (all three of them) I have spitefully left hanging in the Governor's show.

For weeks the story continues in the local papers and one day the short bald man behind the desk is provoked into inviting a group of newsmen to view my painting.  He removes it from the safe, untapes the cardboard used to cover "the offending portions" and when one of the reporters complains he doesn't see what is objectionable, he answers, "If you don't see the obscenity in it, then you don't have a perverted mind." 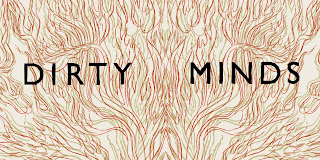 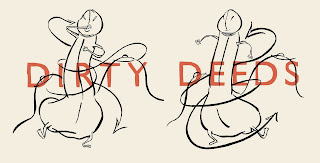 Which is a wonderful lesson if I'd only had ears to hear.  One which, years later, a French philosopher will cause considerable stir by proclaiming: "The viewer is the artist!  The reader is the author!"  Yet here in 1965, an unknown public relations man is offering me that information, in plain mid-western English, for free (more or less).

When I first tell this story to my wife, she demands, "I've got to see it!  Where's the dirty painting?"  At first I demur.  "It's not very good, it's embarrassing, and I told you, it's not even dirty!  But," I add, "you wouldn't believe the stories these guys made up!

"There's only one figure in the painting, God, but they see three.  The bone in His leg--God's femur--they see it as a dick entering His butt.  And the word balloon coming out of His mouth, they see it as a woman's naughty bits which God is manipulating orally.  And...and..." 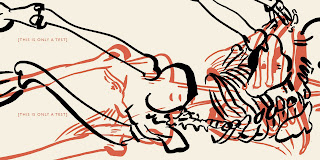 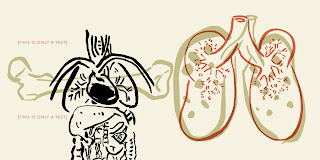 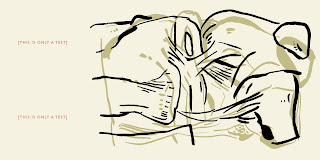 And I look at it and for the very first time I realize: it's truly a very, very dirty painting. 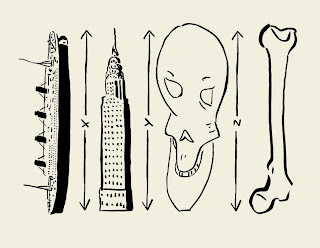 Posted by Ward Schumaker at 11:11 AM No comments: